INSIDE THE SCRIPT:
PROVIDENCE

This scene showing the gauntlet in the Mohawk village was written specifically for this episode, however, when we were watching Episode 411 in the editing room, we thought it would be a nice cliffhanger to start the gauntlet at the end of Episode 411 and end the episode with Roger in the middle of the gauntlet, not knowing if he makes it through or not. Thus, this episode picks up from the same moment with Roger mid-gauntlet and shows that he fails to make it through.

Another editing decision was made to play the upcoming Scene 7 continuous with Scene 3, so that John Grey follows Brianna directly outside to talk more about her decision to visit Stephen Bonnet in jail. It’s an example of how editing can change the pace of certain parts of an episode. What works on the page can be very different once it’s on screen.

In the last episode, we set up that John Grey gave Brianna a letter from her father, but we had Brianna hesitate in reading it until the very end of the show. Now, we get the pay-off as Brianna reveals its contents to Lord John Grey, as she explains why she must see Stephen Bonnet.

This is the first of several flashbacks. We decided the reveal of the letter was more effective if we heard Jamie’s voice reading it, while showing several scenes of Jamie and Claire on their journey to find Roger. The letter was intended as a continuation of a conversation Jamie and Brianna had in Episode 410, where Brianna talks about getting revenge on her rapist, and asks Jamie how he handled his rape by Black Jack Randall. It caught Jamie off-guard, and we liked that Jamie didn't have this info at his fingertips, but the question was something he took in and thought about. Later, worrying that his daughter will pursue some dangerous type of revenge, he writes this letter from the road, encouraging her to forgive her attacker and not ruin her life by carrying anger from her trauma.

This scene shows that Brianna is finally taking her father’s advice and knows she has to try to get closure for her baby’s sake. We loved this sweet moment where John Grey asks to touch Brianna’s stomach. This is poignant for many reasons, chief among them is the fact that John Grey did not get to experience the birth of his son Willie, because he adopted Willie at age six.

We wanted to establish a possible ally for Roger in the Mohawk village, which was accomplished through his getting to know Johiehon, but this also gives dimension to Mohawk warrior Kaheroton, who has feelings for Johiehon, as he tries to connect with Roger. Unfortunately, because Roger doesn’t know Mohawk customs, he fails by making an unintentional faux pas.

“You are impossible not to like” was one of our favorite lines. We are all such fans of the friendship between John Grey and Brianna, which we are playing somewhat warmer than is in the book. The actors have a natural chemistry and we look forward to writing more for these two!

Much discussion took place in the writers’ room over the storyline involving Father Alexandre. The concern was that although the writers loved the priest’s storyline in the book, it’s difficult in the TV version to explore such a complex and involved arc involving a player who is not one of our central characters, thus the challenge was to show the effect of Father Alexandre’s predicament through the experience of Roger and explore how Roger’s story intersects with Father Alexandre’s. What does Roger witness and learn from the priest’s situation? The last line of the scene where Father Alexandre says he’s a prisoner because he “fell in love,” is where we start to show the audience that both men are struggling with their current situations, caused in part by affairs of the heart.

When Marsali discovers Fergus embarking on a dangerous endeavor, we knew the expectation was that she would implore him to not put himself or their family at risk. However, our intention here was to subvert this expectation and show that Marsali, who’s quite spirited and a strong lady of her own merit, would back her husband and insist on taking part in his plan. Not only does she care about Murtagh, she desires to be a team with her husband. It’s a callback to Episode 313 when Fergus goes on another dangerous missions and Marsali insists, “I’m yer wife, I’m coming with ye.”

Outlander is an epic story, and it's often a thrill writing on such a large canvas with fabulous sets, costumes, large crowds and amazing locations, but a writer’s real thrill is writing these types of scenes—two people in one room just talking. Writing for Father Alexandre and Roger was almost like writing a play—dialogue-heavy, raw emotion that goes to the heart of two characters who have lived very different lives and yet find intimate emotional levels in which to connect to each other. Father Alexandre’s words resonate heavily with Roger and his own situation as the priest describes how he’s unable to let go of his love for a certain woman, despite all their obstacles getting in the way of living together.

We like that Roger has been asked to pray by the priest, and here the minister’s son draws upon his childhood for inspiration so that he is able to access his spiritual side and comfort Father Alexandre. We also wanted to hear Father Alexandre’s description of the punishments inflicted in the fire pit, so that later, Roger will know exactly what the priest is going through, which influences Roger’s decision to go back and attempt to help the dying priest.

In a monologue we called Roger’s “Idiot Speech,” we see how Father Alexandre’s story affects Roger and his struggle with his feelings regarding his relationship with Brianna, and the obstacles he has had to overcome. Richard Rankin did a phenomenal job in one of his best performances of the series so far. A writer rarely gets the opportunity to write a speech of this length on network TV, and this is one of the joys of writing for Outlander.

This scene where Brianna visits Bonnet was one of the most hotly debated scenes of the season in the writers’ room. When breaking the story, there were many different opinions about Bonnet’s motivations and how far Brianna should go in her attempt to “forgive Bonnet.” While we wanted her to follow her father’s advice and take the high road in forgiving this man who brutally attacked her, we questioned whether Bree should go as far as to gift him with the knowledge that he has a child who will live on in this world. We even discussed a version where she does not forgive him and goes there merely to give him a piece of her mind, unleashing her anger on him about what he did to her.

In the end, we settled on a version that played closer to the book, but we added the fact that Bonnet sems ungrateful for the forgiveness she offers, even taunting her further. Brianna shifts gears in the middle of the scene and lashes out with a strength and venting some of the rage she feels, letting him know on no uncertain terms that he will pay a price for what he’s done, and that the child will never know of his existence.

Much discussion was devoted to Stephen Bonnet’s final words to her, and whether or not he is truly moved by anything she says.

The key ring, which falls during the chaos, is meant as a cliffhanger of whether or not Stephen Bonnet escapes the explosion and fire at the jail.

In the book, the blowing up of the jail is a much more complicated storyline that we simplified, in part, for time, and in part because Murtagh is still alive in the TV version and we wanted to dovetail the story of his rescue from jail by the Regulators with Brianna’s visit to Bonnet.

As Roger escapes, we see that he is haunted by his conversations with Father Alexandre, finding it hard to leave his friend behind.

This is a callback to Roger’s “Idiot Speech,” as Roger tries to talk himself out of “being an idiot, again.” In escaping while he has the chance, the character of Roger as we know him has too much honor and heart to let a man suffer, so he makes the only decision he can, which is to go back and try to help Father Alexandre.

Even though Roger’s unable to rescue the priest and save his life, he does the only thing he can—give him a quicker, less-painful death. This was a heartbreaking sequence to write as well as shoot, as there is so much emotion here, not only for Roger and Father Alexandre, but for Johiehon and Kaheroton. It was important for us to show the cost of Johiehon’s death to Kaheroton, who was in love with her, as the Mohawk woman joins her true love in the fire and chooses to die with him, rather than live without him.

In the end, Roger pays for his decision to help by being recaptured by the Mohawk, but he made the only choice he could make, as this is just the kind of good person Roger is—and why we all love him. 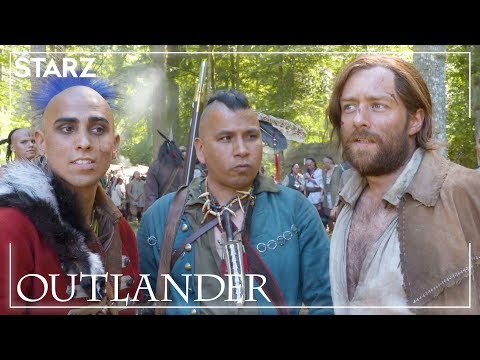 To bring the Mohawk village together, the Costume and Hair + Make-up departments outfitted hundreds of actors. 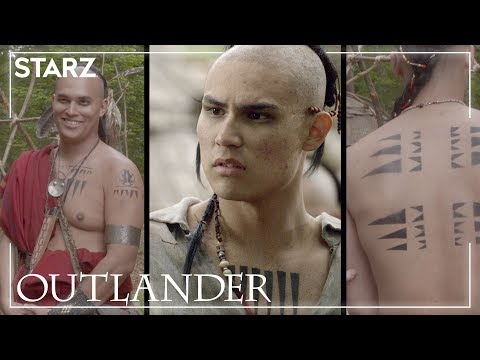