BLOOD OF MY BLOOD

INSIDE THE SCRIPT:
BLOOD OF MY BLOOD

The show opens on Claire at the stream going through her morning routine, establishing the calm before the storm. It gives us a chance to show that Claire has settled into Fraser’s Ridge and has embraced her new life in the 18th Century. Murtagh wasn’t in this episode when we first started breaking it. In fact, the first outline started with Claire facing down the snake in the privy—we even had a toy snake in the writers’ room for inspiration. Ultimately, having a boy fall down a privy wasn’t as practical as we hoped, so we leaned into the moment with the leeches. We paid homage to the snake in the privy in the title card.

Typically, the show starts and ends on scenes from the point of view of the lead characters, but in this case, we made an exception. Lord John Grey is a beloved character by all the writers. We did not want to miss the moment his eyes light up when he first sees Jamie.

Introduction scenes tend to be boring and waste valuable time, but there is just too much history between these characters to skip it. Our biggest challenge was sequencing all of these pivotal moments: 1) Jamie hasn’t laid eyes on his son since Helwater; 2) Claire connecting the dots as she sees John Grey and realizes that this boy is Jamie’s son; 3) Murtagh’s surprise at seeing his former warden from Ardsmuir Prison; and 4) Will the boy remember Jamie? This scene was meant to be outside on the front porch. However, because this episode started filming in January, we only had five hours of daylight to work with. During prep, we moved this scene inside so we could shoot for day, even though the Scotland sky was dark.

The first cut of the episode came in at twenty minutes over the allotted time. Unfortunately, trims had to be made. While Cait and Oliver made a charming character moment out of this scene, it ultimately didn’t drive the story forward.

There was a lot of banter in the writers’ room about what it would be like for a Lord to stay in a modest cabin in the middle of the backcountry. We’ve all had moments where unexpected guests show up—it’s an 18th century story that is very relatable.

This scene was inspired by a conversation with the director, Denise Di Novi. The dialogue was originally supposed to take place during dinner, but in an effort to make it more intimate, we moved it outside so Jamie and William could have an organic moment alone.

This scene was shot in a barn just outside of Falkland. Why not the studio? We covered two small scenes of Roger in “Inverness” that morning, but there wouldn’t be time for cast and crew to drive back to the stages and still finish our day. So, production had to relocate the lean-to from the studio to a nearby barn.

There were many debates about when and how Murtagh would find out about Jamie’s illegitimate son. They usually confide everything in each other, so it’s very possible that Jamie would have told Murtagh in-between episodes while they were hanging out at Fraser’s Ridge. In the end, we decided to let it play out on screen. In an earlier version, Jamie tells him the news about Willie. We changed it later to have Jamie skirting around it and let Murtagh realize and say, “He’s yours, isna he?” Murtagh knows Jamie so well, we wanted him to figure it out. The Regulator movement is the first time Jamie and Murtagh have been on opposite sides, but they both harmonize on one thing: family comes first.

There was a draft where Scene 9 took place on the front porch. Then we cut back and forth from Claire walking to the privy from the lean-to as she overhears their conversation. Due to weather, we had to move this scene inside and it became impossible for Claire to innocently eavesdrop. The walls of this cabin are a foot thick!

This was a very physical scene. After a few rehearsals, we switched up the order of the last few lines to help with blocking.

During production, it was decided to move away from the rainbow. William grew up in Britain where it rains all the time and rainbows are quite common. Instead, we decided to capitalize on the vistas that highlight all the glory of Fraser’s Ridge.

There were many debates about the Claire and Lord John arc. There was concern about having three major scenes with John Grey sick in bed, limiting what can be done physically to keep the story energetic. Luckily, these characters have a rich history and many triggers that are exhilarating to explore on the page. Cait and David delivered these moments in spades. There were even a few tears from the crew on the day of shooting.

The trout tickling part of this scene was inspired by the first Outlander book. Seeing Jamie tickle his way into a wholesome dinner is something the writers have always loved and were thrilled to finally find a home for it.

When we set out to break this episode, we knew we would be at the mercy of a young actor, many of whom find long passages of dialogue challenging to memorize. At first, we kept William’s dialogue to a bare minimum, but once we cast Oliver, we knew we had the freedom to give our talented actor more dialogue.

In the writers’ room, the order of scenes changes often. So often, that the scenes are written on magnetic dry erase tiles and placed in-order on a huge whiteboard, where they can be moved around easily. Typically, each story (Claire/John Grey is one story and Jamie/William is another) is broken out individually, and then we blend the tiles on the board. Often times, the scene order will be changed again during the editing process.

Because this is a quiet episode, the writers’ room was challenged to create a climactic ending for Jamie and William’s story. We knew we were on the right track once the idea of Jamie having to admit William was his son in order to save his life was pitched.

This scene is a callback to the time that Jamie had to say goodbye to Young William at Helwater. It was an emotional ending to Episode 304, “Of Lost Things.” This was one of the first scenes we discussed in the writers’ room. The tone for the entire Jamie/William story was driven by how we wanted to end it.

Said Executive Producer Maril Davis, “In my opinion, this is the ultimate love token. In Season 1, we wanted to do a story similar to the book where Jamie has a ring made of lace and thistles to signify Scotland but we elected to do the ring from the key of Lallybroch as a symbol of the key to his heart. This season, we had the chance to create that original ring. In the book, Bonnet takes Frank’s simple gold band but this would be more generic... This gives the chance for Jamie to take his mother’s silver candlestick, gifted to him by Jocasta, and to have his godfather Murtagh fashion a new ring—a creative twist which we hope will be a fan favorite.”

Getting covered in measles took a lot of work from the Outlander hair and make-up department. Fun fact: David Berry filmed the scenes where Lord John Grey is most ill on his birthday—so he ate his birthday cake covered in red spots.

Said Co-Costume Designer Nina Ayers, “I wanted William to look as much ‘The Little Lord’ as possible and therefore used the finest materials to create his costumes. The cream linen ‘playsuit’ which he wears was designed to link to Jamie’s black linen suit, although purposely ‘impractical’ with the color choice. His silk ‘dinner suit’ is reminiscent of Lord John Grey’s suits, with the contrasting turn back collar. I wanted to show links to both fathers. The fur lined velvet hunting coat was designed to show his wealth but also to help deal with the practicalities of shooting in Scotland in the middle of winter.” 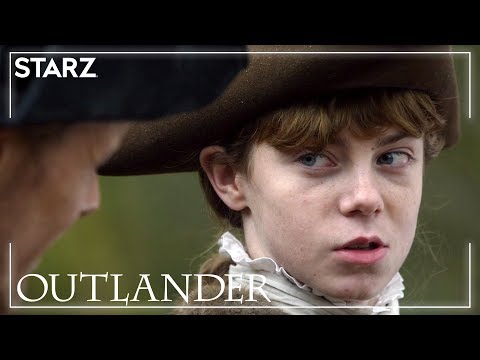